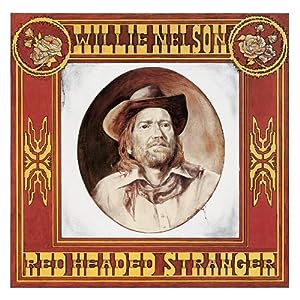 $18.35
As of 2022-12-01 09:01:16 UTC (more info)
Not Available - stock arriving soon
Buy Now from Amazon
Product prices and availability are accurate as of 2022-12-01 09:01:16 UTC and are subject to change. Any price and availability information displayed on http://www.amazon.com/ at the time of purchase will apply to the purchase of this product.
See All Product Reviews

THE outlaw country album, Red Headed Stranger's bare-bones sound was the perfect antidote to the glitzy Nashville Sound dominating the airwaves in the mid-'70s, and lent an understated majesty to this tale of a wandering preacher in the Old West. This deluxe version includes four bonus tracks-three unreleased!-plus the classic Blue Eyes Crying in the Rain .

Though this 1975 album cost Willie only $20,000 to record, it handed him the success he'd craved after years as a hit songwriter and modestly successful singer. By blending originals and vintage material, he created a timeless Western saga, one that originally left Columbia Records, who'd guaranteed him artistic control, skeptical. The label's doubts, amplified by the fact that Nelson had recorded the album in Texas with only his seven-piece touring band, evaporated after the album and two singles, "Blue Eyes Crying in the Rain" and "Remember Me," became huge hits and launched Willie into the stratosphere. This enhanced version preserves the original sequence, adding four bonus tracks. One, a brief snippet of Bach's "Minuet in G" from the 1986 Red Headed Stranger film, is inconsequential. Three more, from the 1975 sessions, are enjoyable covers of Hank Williams's "I Can't Help It If I'm Still in Love with You," Bob Wills's "A Maiden's Prayer," and Pee Wee King's "Bonaparte's Retreat," footnotes to the original but welcome nonetheless. --Rich Kienzle

Nashville Outlaws - A Tribute to Motley ...

only $6.47
Not Available
View Add to Cart

only $5.59
Not Available
View Add to Cart