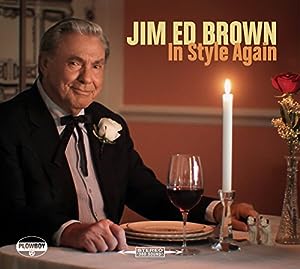 $7.84
As of 2021-10-16 14:10:05 UTC (more info)
Not Available - stock arriving soon
Buy Now from Amazon
Product prices and availability are accurate as of 2021-10-16 14:10:05 UTC and are subject to change. Any price and availability information displayed on http://www.amazon.com/ at the time of purchase will apply to the purchase of this product.
See All Product Reviews

Longtime fan favorite Jim Ed Brown returns with his first solo recording in three decades with the release of IN STYLE AGAIN, his debut project for Plowboy Records.

IN STYLE AGAIN neatly brings together all phases of Brown s historic career. 'When The Sun Says Hello To The Mountain' features the distinctive harmonies of his sisters. The album also features 12 solo performances from the singer. But when an artist as important as Jim Ed Brown steps into the recording studio, other artists naturally want to follow. He is joined on 'Tried and True' and 'You Again' by fellow Grand Ole Opry members Vince Gill and The Whites, respectively. He also reunites with Helen Cornelius on the Carl and Pearl Butler chestnut 'Don t Let Me Cross Over'.

Hell on an Angel