You Don't Mess Around With Jim 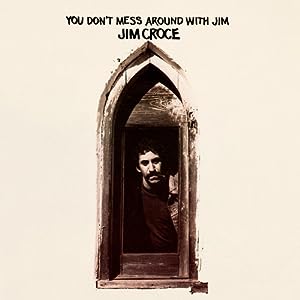 You Don't Mess Around With Jim

Jim Croce was one of the premier architects of the singer/songwriter movement in the early seventies, and during his much revered musical career, he managed to successfully cultivate his story telling, humor and heartfelt thoughts and heartbreak into some of the most memorable songs and melodies ever recorded in our lifetime. His legendary ABC recordings are the soundtrack to a generation of music enthusiasts that continues to this day and will forever stand the test of time.

Growing up in the Philadelphia suburb of Upper Darby, PA, Jim Croce graduated high school and soon found local success as a folk singer during his college days. In those earlier years, he met his future wife and musical partner Ingrid Croce, and together they began touring the coffee house circuit throughout the sixties into the early seventies.

After a few short lived careers in radio advertising, as well as being a truck driver and welder, Jim Croce was determined to score a hit recording career and went out as a solo artist, teaming up with his lead guitarist Maury Muehleisen. As friends Tommy West and Terry Cashman were soon a part of the mix as producers, the hit records soon followed and his debut ABC Records single and album You Don't Mess Around With Jim were a huge success for this legendary performer.

Known for his unique ability to connect with his fans with his simple tales of love, heartbreak and good time feel good songs, this multi-platinum album raced to the top of the charts in no time. Spearheaded by the country rock title track, the album was buoyed with even more success as the brilliant Operator (That's Not The Way It Feels) hit a chord with the hearts of his new legion of fans across the globe.

Whether standout tracks like his classics Photographs And Memories, New York's Not My Home or his masterpiece Time In A Bottle, Jim Croce's You Don't Mess Around With Jim album has surely earned its currency over the years as one of the more important albums of the classic singer/songwriter era.

After several more smash hit recordings and a massive worldwide following, Time In A Bottle was featured a year later in the made for television movie She Lives! which added to the further success of his classic You Don't Mess Around With Jim album.

A few weeks later, Jim Croce along with guitarist Maury Muehleisen and several others were tragically killed in a small plane crash on September 20, 1973. The music world was in shock as one of its newest stars, a true original, the great Jim Croce, his life was cut short way before his prime. Radio and retail outlets were flooded with fan support as a race to buy this album, which became a lasting tribute to the artistry and memory of this legendary performer.

It is now with much anticipation and honor to announce the Jim Croce Friday Music 180 Gram Audiophile Vinyl Series with our first installment with his monumental pop/rock classic You Don't Mess Around With Jim. Mastered impeccably by Joe Reagoso from the original tapes at Friday Music Studios, the You Don't Mess Around With Jim album is a truly one of the more anticipated audiophile vinyl releases of this year.

To help celebrate the anniversary of this limited edition audiophile release, for a very short time, we are also including the rare gatefold cover which includes the original lyrics and photos from the original 1972 release! Look to the Friday Music label for more Jim Croce masterpieces on both 180 Gram Audiophile Vinyl and remastered compact discs in the very near future.

So, join with us now in celebrating the life and times of Jim Croce... with his amazing masterwork You Don't Mess Around With Jim... On pristine 180 Gram Audiophile Vinyl... a true rock classic... only from your friends at Friday Music.

Concert At The Vatican