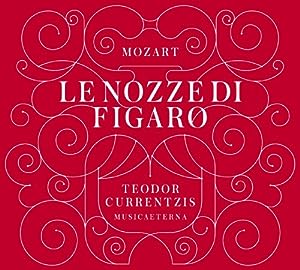 $31.98
As of 2022-09-18 06:38:22 UTC (more info)
Not Available - stock arriving soon
Buy Now from Amazon
Product prices and availability are accurate as of 2022-09-18 06:38:22 UTC and are subject to change. Any price and availability information displayed on http://www.amazon.com/ at the time of purchase will apply to the purchase of this product.
See All Product Reviews

Almost one thousand miles east of Moscow, in the Russian city of Perm, the charismatic and provocative conductor Teodor Currentzis and MusicAeterna, the orchestra and choir he created, are recording Mozart s Da Ponte operas. The first release of these three opera recordings is Le Nozze di Figaro. These no-compromise studio recordings are the fruit of a unique way of living and working which Currentzis has established in this remote, formerly closed city, which was dedicated to arms manufacturing in Soviet times.

The recording of Le Nozze di Figaro represents an unprecedented commitment by Currentzis and MusicAeterna in terms of preparation, session and postproduction time, to create the best possible sound. The recording embodies a radical new approach to orchestral virtuosity, score fidelity, vocal style and performance practice. Figaro was recorded over eleven straight days and nights for up to fourteen hours a day. Currentzis has tried to create an environment for those who search for what he calls a real life in music. His approach to the Mozart score is based on the conviction that it is virtually impossible today to hear it performed precisely and in full. His stated intention is to undo what he considers the effects of the 20th-century operatic tradition that is focused on simplification and vocal volume. For Currentzis, this recording represents the culmination of a decade-long research project dedicated to the discrepancies between the composer s will and what our ears have become used to. Says Currentzis, There are so many recordings which convey the general spirit of Mozart s music. The only point in making a new one is to give the audience a chance to hear and learn about all the magic which this score holds.

Born in Athens, Greece in 1972, Teodor Currentzis has been calling Russia his home since the beginning of the 1990s when he began studying conducting at the state conservatory of St. Petersburg under the tutelage of legendary professor Ilya Musin. He s outspoken, provocative and passionate and, as artistic director, he has quickly turned the Perm State Opera and Ballet Theater into Russia s most innovative and talked-about theatrical music venue.

Le Nozze di Figaro is available as a 3-CD Deluxe Edition featuring a 300 page bound book that includes tracklist, full libretto and liner notes. A Super Deluxe Edition is also available which includes everything from the Deluxe Edition plus a Blu-ray audio disc with the complete opera in high-resolution 5.1 surround audio.

Evening at the Lyric Opera of Chicago