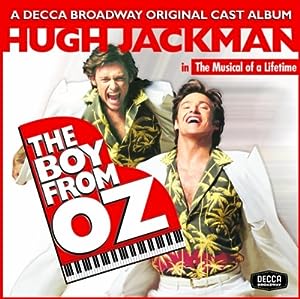 $11.77
As of 2022-09-24 18:37:05 UTC (more info)
Not Available - stock arriving soon
Buy Now from Amazon
Product prices and availability are accurate as of 2022-09-24 18:37:05 UTC and are subject to change. Any price and availability information displayed on http://www.amazon.com/ at the time of purchase will apply to the purchase of this product.
See All Product Reviews

Peter Allen was an Australian gay man who was once married to Liza Minnelli and was still officially in the closet when he died of AIDS in 1992. It's obvious that when it comes to sheer drama, Allen's life is pretty hard to beat, and Hugh Jackman's portrayal in this bio-show terrifically brings home the music man's energy and inner contradictions. Too bad his life's intensity wasn't reflected in Allen's milquetoast songs, which are generously sprinkled throughout the show. Technically, Jackman's not the best singer (Brian Stokes Mitchell continues to rule Broadway in that regard), but his charisma is undeniable. His take on "I Go to Rio" is appropriately high octane, for instance, while "I Still Call Australia Home" (Oz's unofficial anthem) is rather poignant. As Judy and Liza, respectively, Isabel Keating and Stephanie J. Block try hard to emulate their models' vocal styles, which can be really distracting. Overall, though, this album is mostly for serious fans of either Allen and Jackman. --Elisabeth Vincentelli