Songs of the Civil War 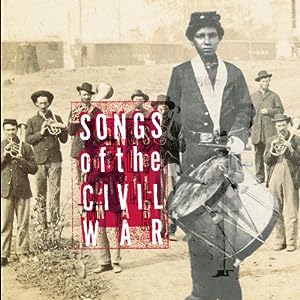 Songs of the Civil War

$5.25
As of 2021-09-10 17:57:24 UTC (more info)
Not Available - stock arriving soon
Buy Now from Amazon
Product prices and availability are accurate as of 2021-09-10 17:57:24 UTC and are subject to change. Any price and availability information displayed on http://www.amazon.com/ at the time of purchase will apply to the purchase of this product.
See All Product Reviews

Inspired by the successful Civil War documentary from Ken Burns, this powerful soundtrack tackles many diverse musical styles from traditional folk and bluegrass to black gospel and outlaw country.

Prompted by the success Ken Burns's popular Civil War documentary (which spawned its own soundtrack), Songs of the Civil War presents an eclectic assortment of contemporary performers tackling period pieces that date back to the War Between the States. Here's Sweet Honey in the Rock tackling the slave lament "No More Auction Block for Me," Judy Collins singing "Battle Hymn of the Republic," and Kate and Anna McGarrigle essaying the lovely (and very suitable) "Hard Times Come Again No More." Between performances by name artists (Kathy Mattea, Waylon Jennings, and Richie Havens among them), instrumentals performed by the U.S. Military Academy Band provide a sense of time and place. --Steven Stolder

only $3.28
Not Available
View Add to Cart