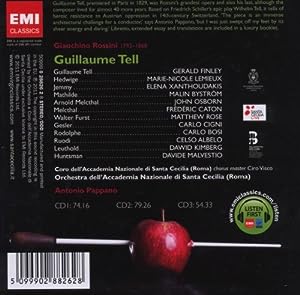 $21.49
As of 2020-09-25 08:51:03 UTC (more info)
Not Available - stock arriving soon
Buy Now from Amazon
Product prices and availability are accurate as of 2020-09-25 08:51:03 UTC and are subject to change. Any price and availability information displayed on http://www.amazon.com/ at the time of purchase will apply to the purchase of this product.
See All Product Reviews

In Rome this past autumn, Antonio Pappano and the choir and orchestra of the Accademia Nazionale Di Santa Cecilia launched the present season with complete performances of Rossini's final French opera seria, William Tell. Canadian baritone Gerald Finley led a stellar international cast boasting tenor John Osborn, mezzo Marie-Nicole Lemieux, and sopranos Elena Xanthoudakis and Malin Byström in the story of Switzerland's legendary founding fathers and the courageous folk hero forced to shoot an apple from his son's head. The results were by all accounts sensational. It is this rare and justly celebrated revival of Rossini's opera - one scarcely known today, beyond the familiar climax of its overture - that EMI Classics captures live on a landmark new recording due for international release in July 2011.

Composed in 1829, almost four decades before Rossini's death, the five-act grand opera William Tell ("Guillaume Tell") nonetheless marked the composer's final contribution to the form. Written to a French libretto derived from Schiller's verse drama Wilhelm Tell, Rossini's opera depicts the eponymous 13th-century folk hero whose courage - and famed marksmanship - launched an uprising that brought the Swiss independence from the Hapsburg dynasty. Anticipating later operatic heroes like Verdi's Don Carlo, Rossini's title character is a wholly political figure, although there is also a romantic component to the opera's plot, tracing the story of star-crossed lovers Arnold, son of the Swiss leader, and Mathilde, an Austrian princess.

William Tell was a triumph at its Parisian premiere, establishing the structure of grand opera in separate scenes that would soon be used by Bellini, Donizetti, and Verdi, but its epic scale and extravagant vocal demands mean subsequent productions have been few and far between. Thanks to many film and television appearances, however, the overture's famous galloping finale has reached far beyond the typical audience for opera. Anticipating the Orchestra dell'Accademia Nazionale di Santa Cecilia's concert performance of the work in London this summer, the Sunday Times observed: "Most people know William Tell as the theme song for The Lone Ranger, but the full opera is a rarely performed masterpiece. It's the highlight of the 2011 Proms, thanks to Antonio Pappano."

Instead of using the opera's libretto in Italian translation, as has become customary, Pappano turned to the original French, explaining: "It can only be done in French. It's written with an extra sense of bravado in the recitatives." After the Roman performances, the Financial Times marvelled:

"The orchestra is fleet and wonderfully together, with crunch, buoyancy, a keen sense of collective phrasing, and its own very distinctive sound. An excellent cast, led by Gerald Finley, on magnificent form in the title role, brought drama and momentum. Pappano...kept tension high. His singers brought meaning to every phrase, giving us driven, motivated vocal lines."

As the conductor points out, "William Tell has a famously impossible tenor part..., so we are lucky to have John Osborn." In fact, it was Pappano who discovered the American tenor, one of the few great exponents of the notoriously high and challenging role of Arnold. The Financial Times confirms that "Osborn sailed through the stratospheric reaches of Arnold's tenor heights with sweetly lyrical roundness." Likewise, the paper found Swedish soprano Malin Byström - "one of the few," says Pappano, "who can cope with the extreme lyrical and dramatic demands - and coloratura - of the part" - to be "a sublimely elegant Matilde."

The world's leading opera conductor, Antonio Pappano is Music Director of the Royal Opera House, Covent Garden as well as of Rome's Orchestra dell'Accademia Nazionale di Santa Cecilia. It was with the Santa Cecilia choir and orchestra that he recorded Verdi's Requiem live in concert for a 2009 EMI Classics release starring soloists including bass René Pape; the album won numerous international awards including BBC Music Magazine and Gramophone Awards for "Best Choral Recording of the Year," the Classical BRIT "Critics' Choice" award, and the Choc de Classica of the Year. Another outstanding example of the conductor's partnership with Santa Cecilia and EMI is his 2009 recording of Puccini's Madama Butterfly, which - with Angela Gheorghiu in the title role - scooped the Gramophone Award for Opera.

Pappano's success with William Tell in Rome was by no means his first with Rossini; in November 2010, EMI Classics released his rendition of the composer's oratorio Stabat Mater, again featuring the forces of Santa Cecilia, with an all-star cast of soloists including soprano Anna Netrebko. The disc earned a five-star Financial Times review and was pronounced the "finest recording of the work since a 1971 one with Luciano Pavarotti" by the AP's Verena Dobnik, who admired the way "Pappano's free-breathing baton draws intense whispers as well as rousing explosions to paint in sound what he calls `the desperation and the drama' of Mary under the cross." Selecting the recording as its "CD of the Week," the Sunday Times declared: "Pappano lives the text like the great opera conductor he is, bringing consolation as well as fire and brimstone to Rossini's heady spiritual brew." Similarly, BBC Music magazine voted the album its "Disc of the Month," awarding it full marks for both sound and performance, and concluding:

"Above all it is Pappano's stylistic assurance and his understanding of the need in Rossini to combine flamboyance with discretion, that makes this a superior account of one of its composer's achievements."