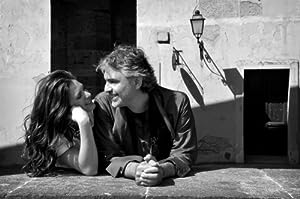 $8.00
As of 2020-09-30 17:52:09 UTC (more info)
Not Available - stock arriving soon
Buy Now from Amazon
Product prices and availability are accurate as of 2020-09-30 17:52:09 UTC and are subject to change. Any price and availability information displayed on http://www.amazon.com/ at the time of purchase will apply to the purchase of this product.
See All Product Reviews

Andrea Bocelli's new studio album is a collection of the most famous Italian songs - including Mamma , Funiculi Funicula and Santa Lucia . They are the songs which have enchanted Andrea since childhood. Released to coincide with his 50th birthday, the album is a personal tribute to his musical heritage. Popularised through concert, radio and record and the film industry by the great tenors of the 19th and 20th centuries, this selection of songs is a celebration of the Italian tenor tradition . Thanks to the legendary voices of Enrico Caruso, Beniamino Gigli, Franco Corelli, Mario Lanza and Luciano Pavarotti, these songs have become a huge global export and fuelled the romance of generations to come. Incanto is also a homage to Love . It includes a group of songs which have told love stories in music for the past 170 years. The repertoire is a tribute to the many faces and places of love: love for a mother (Mamma); love for a woman (O surdato 'nammurato , Era di maggio , Un amore cosi grande , Non ti scordar di me ); love for a place (the pier in Santa Lucia, Mount Vesuvio in Funiculi Funicula ); love for a city (Napoli, Granada) and love for a country (Italy). Love for Italy , and a particular affection for Naples are prevalent themes throughout Incanto. Andrea has chosen one contemporary Neapolitan song - the "tarantella" Pulcinella , which highlights his fond connection to Naples and the city's unique position in the past, present and future of Italian song. The deluxe edition sets Andrea's songs in the romantic context of 1950s Naples. The archive materials provide a nostalgic snapshot of 1950s glamour, when Naples was the honeypot for the rich and famous. The footage captures the spirit of romance and optimism during the days of Andrea's childhood - a sense of optimism prevalent in post war Italy around the time of Andrea's birth is captured by the visual themes of the album. The incomparable natural beauty of southern Italy is celebrated, as well as the magical aura of the 1950s and La dolce vita , which has enchanted generation upon generation since. The DVD also includes an interview with Andrea shot in different locations in Naples.

(Amazon.co.uk Review) Incanto is the first studio album from Italian operatic star Andrea Bocelli since 2006's Amore, stop-gapped of course by the following year's Vivere. Now 20 albums deep and heading for 70 million sales worldwide, there doesn't seem to be much Bocelli can do wrong, though perhaps key to his success is his refusal to rest on his laurels--to always present a considered and varied selection of material. On Incanto he again offers a well-selected mix of folk songs, operatic evergreens, and musical hits. Opening with a stunning collaboration with singer Veronica Berti on “Un Amore Cosi Grande" (“A Love So Great"), the album gets off to an impassioned start. A romantic thread is weaved through “O Surdato Nnammurato", Cesare Andrea Bixio's “Mamma", and “Voglio Vivere Cosi", while album highlights include Neopolitan classic “Santa Lucia" and the 19th-century folk song “Funiculi Funi! cula"--an ode to the first funicular on Mount Vesuvius. Add to that the soaring “Because" and the sweeping “Era De Maggio" (featuring Anna Bonitatibus), and you have what is arguably Bocelli's best collection since Romanza. --Danny McKenna

Brian Asawa - The Dark Is My Delight And...

only $3.23
Not Available
View Add to Cart