Return to the 36 Chambers: The Dirty Version 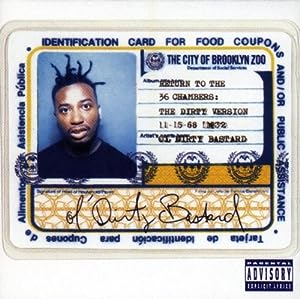 Return to the 36 Chambers: The Dirty Version

$5.13
As of 2022-11-17 16:19:31 UTC (more info)
Not Available - stock arriving soon
Buy Now from Amazon
Product prices and availability are accurate as of 2022-11-17 16:19:31 UTC and are subject to change. Any price and availability information displayed on http://www.amazon.com/ at the time of purchase will apply to the purchase of this product.
See All Product Reviews

Return's title and various lyrics acknowledge Wu-Tang's self-built mythology, but Ol' Dirty Bastard's solo debut, like the man himself, runs on its own idiosyncratic power. Rapping forcefully and on point--mumbling, singing, allowing weird wordless sounds to escape his throat in an assertion of his right to make random noise--ODB slips from mode to mode like Marvin Gaye juxtaposing the gruff and the smooth in the same song. The production, mostly by the RZA, sets the man down in the middle of funky, shape-shifting tracks to scream for blood, shout out to the Temptations and "you other grooops!" and threaten "any MC in any 52 states." "I love that guy," ODB secret identity Russell Jones declares of his alter ego at the outset; after a listen to this disc, it's likely at least part of you will, too. --Rickey Wright

Church In These Streets [Deluxe Edition]

only $3.49
Not Available
View Add to Cart