Carnival III: The Fall and Rise of a Refugee 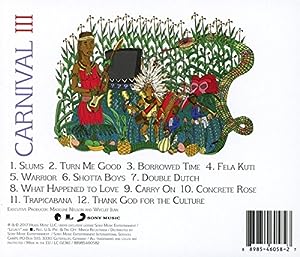 Carnival III: The Fall and Rise of a Refugee

$2.89
As of 2021-09-10 09:50:45 UTC (more info)
Not Available - stock arriving soon
Buy Now from Amazon
Product prices and availability are accurate as of 2021-09-10 09:50:45 UTC and are subject to change. Any price and availability information displayed on http://www.amazon.com/ at the time of purchase will apply to the purchase of this product.
See All Product Reviews

Carnival III: The Rise and Fall of a Refugee is the 3rd installment in the Carnival series by Wyclef Jean featuring contributions from Emeli Sande , Supah Mario, The Knocks, and Lunch Money Lewis. Wyclef is known for his wealth of musical influences from jazz to classic rock to reggae.

With his critically acclaimed, Grammy® nominated debut The Carnival, he launched himself as a producer and solo artist whose work drew from elements of pop, country, folk, disco, Latin, and electronic music. As a solo artist, Wyclef Jean has released six albums that have sold nearly nine million copies worldwide, including 1997's The Carnival and 2000 s The Ecleftic: 2 Sides II a Book.

No s Is Good s

The In Sound From Way Out!