Quiet About It: Tribute to Jesse Winchester 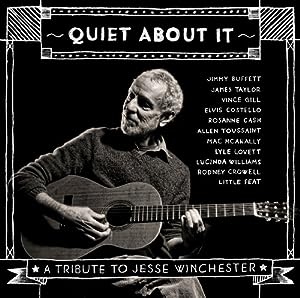 Quiet About It: Tribute to Jesse Winchester

$199.99
As of 2021-04-21 05:44:58 UTC (more info)
Not Available - stock arriving soon
Buy Now from Amazon
Product prices and availability are accurate as of 2021-04-21 05:44:58 UTC and are subject to change. Any price and availability information displayed on http://www.amazon.com/ at the time of purchase will apply to the purchase of this product.
See All Product Reviews

Jesse Winchester, a gifted songwriter and musician, has inspired many iconic artists of our time. When Jesse was diagnosed with esophageal cancer last year, Jimmy Buffett and Elvis Costello immediately agreed it would be a good idea to put together a tribute album as a show of support.

As taken from the album liner notes, written by Bill Flanagan, I don't know anyone who dislikes Jesse Winchester's music. It seems to me that there are only those who love it and those who have never heard it. Jesse is a songwriter's songwriter, praised by every composer from Dylan down and covered by greats from Wilson Pickett to the Everly Brothers. Jesse Winchester's songs are like mirrors in which both performers and listeners can see themselves.

At Christmas of 2011 Buffett wrote to Jesse and told him the album was coming, a gift from a whole bunch of grateful musicians and songwriters to a master. Jesse expressed his gratitude and had some good news of his own. He had beaten the odds after treatment and surgery the doctors had told him he was cancer free. Soon he returned to the road and as of this writing is performing again, making up for a lost year. A happy ending all around.

This album is a tribute to a great singer/songwriter and also to the community of musicians who pulled together to show their love and respect to Jesse when he was down. Now that Jesse is back up, make sure you see him when he comes to your town. They are not making any more like him, says Bill Flanagan.