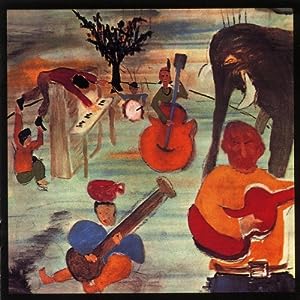 $10.62
As of 2022-09-24 19:05:39 UTC (more info)
Not Available - stock arriving soon
Buy Now from Amazon
Product prices and availability are accurate as of 2022-09-24 19:05:39 UTC and are subject to change. Any price and availability information displayed on http://www.amazon.com/ at the time of purchase will apply to the purchase of this product.
See All Product Reviews

This 1968 album was one of the most auspicious debuts in rock, here augmented by alternate takes of Tears of Rage and Lonesome Suzie , and no less than 7 unreleased outtakes!

Music from Big Pink stands as one of those rare albums that turned the rock world on its axis. On this record, released in 1968 at the height of the psychedelic revolution, the five members of the Band (along with producer-sideman John Simon) eschewed spacey diversions, opting for an earthier route. Soon enough, wah-wah pedals and tape loops were making way for fiddles and mandolins. The group's most democratic effort (Robbie Robertson would soon emerge as the ensemble's mouthpiece), the debut's 11 songs come from Robertson, bassist Rick Danko, and pianist Richard Manuel, who contributes two songs and cowrote the doleful opener, "Tears of Rage," with Bob Dylan. Manuel's role would diminish from this point hence and the balance he brought to the quintet would be missed. Many would argue that Big Pink's sequel, The Band, represents their crowning achievement. The truth is, Big Pink is the purest distillation of the Band, and their preeminent recording. This remastered reissue is generously expanded to include nine bonus tracks, a bunch highlighted by a Robertson rarity ("Ferdinand the Imposter") and a cover of the Stanley Brothers's "If I Lose." --Steven Stolder

Sultans of Swing - Very Best of