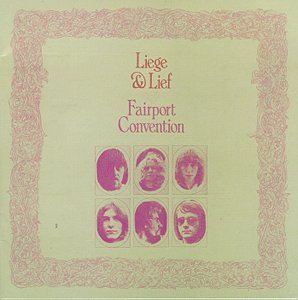 $9.86
As of 2021-07-22 19:19:48 UTC (more info)
Not Available - stock arriving soon
Buy Now from Amazon
Product prices and availability are accurate as of 2021-07-22 19:19:48 UTC and are subject to change. Any price and availability information displayed on http://www.amazon.com/ at the time of purchase will apply to the purchase of this product.
See All Product Reviews

British hippies who started out emulating Jefferson Airplane, Fairport Convention escalated their homeland connections with each outing, culminating in this, their fourth album and a watershed for British folk-rock. Hindsight offers the ironic possibility that the Dylan covers of its predecessor, Unhalfbricking, opened a window onto the earlier Irish-English-Scots roots of the American music they loved, and Liege & Lief jumps through that window triumphantly. "Come All Ye" underscores their affinity for the Band yet is joyfully rooted in their own fertile folk traditions, echoed in a mix of classic songs from members Sandy Denny, Ashley Hutchings, and Richard Thompson, and given direct homage in the extended ballads "Matty Groves" and "Tam Lin," which evoke Neil Young & Crazy Horse in kilts. Fiddler Dave Swarbrick's arrival as a fulltime member adds new richness and a wonderful foil for Thompson's superb guitar leads. A medley of jigs and reels showcases their flair for hot-wiring traditional British Isles dances, a fixture ever since. --Sam Sutherland

Wake Up And Smell The Coffee

The Sound Of The Smiths: The Very Best O...