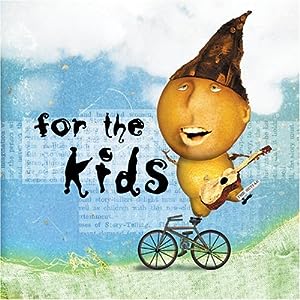 $9.91
As of 2022-09-28 03:53:45 UTC (more info)
Not Available - stock arriving soon
Buy Now from Amazon
Product prices and availability are accurate as of 2022-09-28 03:53:45 UTC and are subject to change. Any price and availability information displayed on http://www.amazon.com/ at the time of purchase will apply to the purchase of this product.
See All Product Reviews

Benefiting the VH-1 Save the Music Foundation, this is a collection of children's songs, ranging from traditional to '70s classics to originals. Includes \The Rainbow Connection"""""" by Sarah McLachlan"""

An all-star cast has joined forces to produce a wonderful CD and, if that weren't exciting enough, a portion of the proceeds will help restore music education in the U.S. public school system through the VHI Save the Music Foundation. Clever new renditions of familiar Muppets and Sesame Street tunes abound, but Semisonic's Dan Wilson, ex-Del Fuego artist Dan Zanes, Toad the Wet Sprocket's Glen Phillips, and Bleu wrote songs for this album, and Tom Waits's lullaby "Bend Down the Branches," originally recorded for a short film, makes its debut on this CD. No offense, Kermit, but the frog's 1979-vintage "The Rainbow Connection" never sounded so sultry as Sarah McLachlan's version here. Another favorite is "The Hoppity Song," a rock & roll ode to Five for Fighting frontman John Ondrasik's son Johnny. Make no mistake--this isn't one of those CDs that is more for adults than kids--songs about hygiene, the alphabet, and crying ("It's All Right to Cry" originally from Marlo Thomas's Free to Be You and Me) are truly "for the kids." That said, adults will enjoy hearing their favorite artists switch gears in this gentle (mostly, not Bleu's energetic "Snow Day!"), upbeat compilation, which combines just the right blend of familiar sing-along songs and exciting new material. The booklet doubles as a foldout coloring book, with illustrations for each song. A fun and noble effort for a fun and noble cause. --Karin Snelson

only $2.82
Not Available
View Add to Cart

Star Wars: Attack Of the Clones