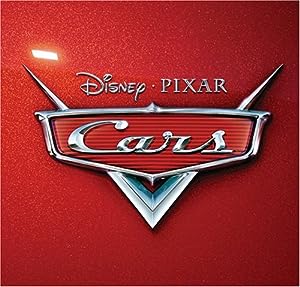 $6.93
As of 2021-12-03 21:31:44 UTC (more info)
Not Available - stock arriving soon
Buy Now from Amazon
Product prices and availability are accurate as of 2021-12-03 21:31:44 UTC and are subject to change. Any price and availability information displayed on http://www.amazon.com/ at the time of purchase will apply to the purchase of this product.
See All Product Reviews

The High Octane Film event of the Summer! Cars is the journey of Lightning McQueen, a hotshot animated race car voiced by actor Owen Wilson. En route to a big race, the cocky McQueen gets waylaid in Radiator Springs, where he finds the true meaning of friendship and family. The all star vocal cast includes free-wheeling performances by Paul Newman, Bonnie Hunt, Larry the Cable Guy, Tony Shalhoub, Michael Keaton, George Carlin, Katherine Helmond and Cheech Marin. The Soundtrack: The Ultimate Road Trip Album! The soundtrack features some of today's most popular country, rock and pop stars including all-new music and new recordings of road classic favorites by music superstars Sheryl Crow, John Mayer, Brad Paisley, Rascal Flatts, James Taylor and score by Academy Awardr winner Randy Newman. The music will make you want to put the top down, turn the volume up and cruise! Music is heavily integrated throughout the .lm, revving up the audience for the soundtrack! Collector's Edition Digipak is available on the initial orders only.

Cars is a typical Disney-Pixar animated movie in that it deals with an anthropomorphic character (here, a car) and the heartwarming values of family and friendship. (Alas, we'll have to wait a little while longer for the company to take on greed and selfishness.) The accompanying soundtrack is equally typical in that it's split between catchy pop songs and a score by Randy Newman. The clear highlight of the pop tracks is Sheryl Crow's boisterous, huge-sounding "Real Gone" (her best song in ages). Rascal Flatts also cover Tom Cochrane's 1991 hit "Life Is a Highway," while John Mayer rocks out on "Route 66" (Chuck Berry's elegantly lean version is included as well). For his part, Newman continues his distinguished association with quality animation by supplying a nimble score. It's fun to hear him deploy riffs that wouldn't be out of place on a Quiet Riot album on the bombastic "Opening Race," while the bluesy "Bessie" does George Thorogood with a tuba. The CD's overall Southern flavor is emphasized by the frequent use of banjo and slide guitar, as well as by score tracks cantering about, like "McQueen and Sally." And, as usual, Newman delivers a nostalgic, misty-eyed song--in this case "Our Town," performed by that master of sensitive laid-back charm, James Taylor. --Elisabeth Vincentelli