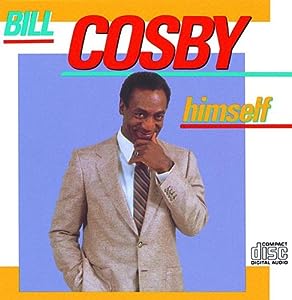 $2.91
As of 2022-06-21 01:14:24 UTC (more info)
Not Available - stock arriving soon
Buy Now from Amazon
Product prices and availability are accurate as of 2022-06-21 01:14:24 UTC and are subject to change. Any price and availability information displayed on http://www.amazon.com/ at the time of purchase will apply to the purchase of this product.
See All Product Reviews

The soundtrack to Bill's 1982 concert film, which actually gave NBC's Brandon Tartikoff the idea for The Cosby Show ! And Himself was also a career milestone for Cosby's work, as he turned away from stories of his childhood to adult themes.

Taken from a 1982 concert film, this CD contains several solid routines by the veteran comedian. Most of these portrayals are humorous takes on family life. Cosby gives special attention to the messiness and frustrations of child rearing. His caricatures of domestic situations reveal a sharp eye for telling details that most listeners will recognize. Cosby pens the material himself and it's tightly written stuff, indeed. "The Dentist" perfectly captures the humiliation and absurdity of a visit to the tooth doctor. "Chocolate Cake for Breakfast" might be the only flop here. The comic's drawn-out performance is heavy-handed and everything gets a little too spelled-out. But for the most part this disc features Cosby in good form. The man is the embodiment of All-American humor and this album reflects that. --Fred Cisterna

Skanks for the Memories