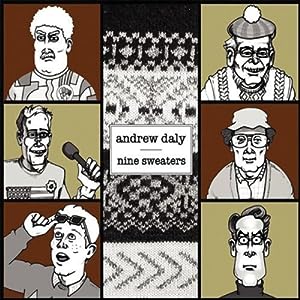 $2.81
As of 2021-07-21 12:35:40 UTC (more info)
Not Available - stock arriving soon
Buy Now from Amazon
Product prices and availability are accurate as of 2021-07-21 12:35:40 UTC and are subject to change. Any price and availability information displayed on http://www.amazon.com/ at the time of purchase will apply to the purchase of this product.
See All Product Reviews

This two-disc debut album compiles all of the characters that Andrew
Daly performed during his ten-week Comedy Death Ray residency at
the UCB Theatre in Los Angeles in Spring 2008. While the outside
world may know Daly best from MADtv, The Showbiz Show with
David Spade, and his scene-stealing portrayal of sportscaster Dick
Pepperfield in the Will Ferrell film Semi-Pro, Los Angeles comedy fans
know him as a standout member of the UCB s acclaimed Asssscat
troupe and from the countless character monologues he s performed
at shows all across town. On Nine Sweaters, Daly shows not only his
remarkable range but also his penchant for the demented and absurd
as he sketches such unforgettable characters as aspiring actor Hap
Arden, sing-along specialist Skip McCabe, octogenarian standup
novice Ben Alterman, and philandering futurist The Incredible Blasco.
In addition to the nine principal characters on the album, each disc
contains a bonus sweater for a total of eleven tracks.