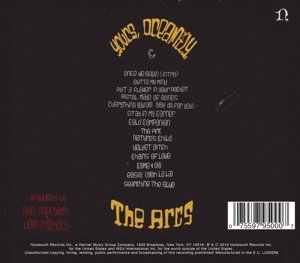 $10.29
As of 2021-07-29 10:54:01 UTC (more info)
Not Available - stock arriving soon
Buy Now from Amazon
Product prices and availability are accurate as of 2021-07-29 10:54:01 UTC and are subject to change. Any price and availability information displayed on http://www.amazon.com/ at the time of purchase will apply to the purchase of this product.
See All Product Reviews

The Arcs’ debut album, Yours, Dreamily, will be released Friday, September 4 on Nonesuch Records. In anticipation of the release, “Stay in My Corner” was premiered on June 9 at NPR Music. Of the song, NPR Music’s Stephen Thompson praises, “…it's got a slinky, timeless feel, propelled with alluring ease by Auerbach's falsetto and a lush instrumental backdrop befitting The Arcs' roster.” The Arcs will be touring in support of the album; details will be announced soon.

The Arcs collaboratively wrote and recorded 13 tracks for Yours, Dreamily, with the musicians playing a large array of roles both vocally and instrumentally. Co-produced by Auerbach and Michels, the album was recorded in roughly two weeks through spontaneous, informal sessions across the country at the Sound Factory in Los Angeles, the Diamond Mine in Queens, Auerbach’s Easy Eye Sound in Nashville, and in a lounge room at Electric Lady in Manhattan. Tchad Blake mixed the album on his horse farm in Wales.

In advance of Yours, Dreamily, The Arcs recently released a 7-inch single. Inspired by the Floyd Mayweather vs. Manny Pacquiao boxing match, the single includes the songs “Stay in My Corner” b/w “Tomato Can.” “Outta My Mind,” a second 7-inch and the first single being released to radio, will make its debut later in June of 2015.