You Can't Use My Name The RSVP PPX Sessions 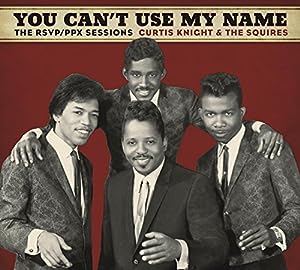 You Can't Use My Name The RSVP PPX Sessions

$4.65
As of 2021-06-02 13:34:31 UTC (more info)
Not Available - stock arriving soon
Buy Now from Amazon
Product prices and availability are accurate as of 2021-06-02 13:34:31 UTC and are subject to change. Any price and availability information displayed on http://www.amazon.com/ at the time of purchase will apply to the purchase of this product.
See All Product Reviews

This special compilation presents Jimi Hendrix's 1965-1967 sessions with Curtis Knight & The Squires prior to his international fame leading the Jimi Hendrix Experience.

While Jimi Hendrix's intermittent tenure as a guitarist for Curtis Knight & The Squires in 1965 and 1966 was relatively brief, more than 100 albums have been crafted from approximately forty studio recordings and consumer grade stage recordings by the group. Most featured low fidelity variations, remixes, edited versions, and instrumentals of the same material often with their song titles changed. These albums were poorly annotated and all too often featured cover art that depicted the guitarist at the peak of his Jimi Hendrix Experience fame (and not as 'Jimmy Hendrix,' a sideman to Curtis Knight) and thus snared unwitting fans throughout the world that were starved for new Hendrix music for decades.

Jimi Hendrix was hamstrung throughout his career by litigation over these recordings in the US and UK and these fights continued until his family ultimately prevailed in litigation. You Can't Use My Name stands as their first attempt to present this music in its original context.

You Can't Use My Name is newly mixed and prepared for release by Eddie Kramer and includes the previously unreleased 1966 recording "Station Break," the full length versions of "Knock Yourself Out [Flying On Instruments]," "No Such Animal," and the 1967 recording of "Gloomy Monday" that includes dialogue between Hendrix and producer Ed Chalpin (featuring the guitarist's request that the producer not use his name on this session because of the ongoing litigation between them).

Listen to the Music: The Very Best Of Th...

This Is Where I Live