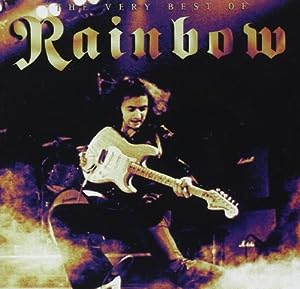 $5.25
As of 2021-07-25 00:24:48 UTC (more info)
Not Available - stock arriving soon
Buy Now from Amazon
Product prices and availability are accurate as of 2021-07-25 00:24:48 UTC and are subject to change. Any price and availability information displayed on http://www.amazon.com/ at the time of purchase will apply to the purchase of this product.
See All Product Reviews

16 remastered tracks on one CD. Tracks include: Man on the Silver, Catch the Rainbow, Since You Been Gone, Street of Dreams.

Founded by Deep Purple's founding guitarist Ritchie Blackmore, and originally called Blackmore's Rainbow, Rainbow was a revolving-door supergroup, in which artists like Ronnie James Dio, Cozy Powell, Joe Lynn Turner, and Tony Carey entered just long enough to establish themselves and bolster their resumes. Considering the band's instability, Rainbow created a number of surprisingly strong tunes over its 10-year career. The first half of The Best of Rainbow features Dio's inimitable vocals on such Deep Purple-styled stormers as "Man on the Silver Mountain," "Stargazer," and "Kill the King." The second part of the disc is from the later and more commercially oriented part of the band's career, and contains the Turner classic "Since You've Been Gone" as well as "Stone Cold" and "Power." If nothing else, The Best of Rainbow is loaded with the kind of mind-bending solos that earned Blackmore and Rainbow their stripes. --Jon Wiederhorn