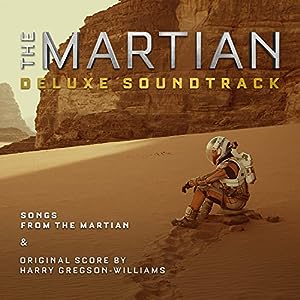 $17.97
As of 2021-07-21 17:04:28 UTC (more info)
Not Available - stock arriving soon
Buy Now from Amazon
Product prices and availability are accurate as of 2021-07-21 17:04:28 UTC and are subject to change. Any price and availability information displayed on http://www.amazon.com/ at the time of purchase will apply to the purchase of this product.
See All Product Reviews

The Martian Deluxe Soundtrack is compiled of both 'Songs From The Martian' and 'The Martian: Original Motion Picture Score'.

'Songs From The Martian' is the companion Soundtrack to the film The Martian, the action adventure directed by Ridley Scott, starring Matt Damon in the lead role as Astronaut Mark Watney. The '70s-laden album is comprised of some of the greatest classics from disco's golden era (tracklist below) including "Turn The Beat Around" (Vickie Sue Robinson), "Hot Stuff" (Donna Summer), "Rock The Boat" (Hues Corporation), "Waterloo" (ABBA), and "I Will Survive"(Gloria Gaynor), and others.

The music from the film evinces the plight of the film's protagonist, Astronaut Mark Watney, played by Matt Damon (the Bourne film series), who during a manned mission to Mars set in the not-too-distant future is presumed dead after a fierce storm and left behind by his crew. But Watney has survived and finds himself stranded and alone on the hostile planet with only meager supplies - and limited distractions - including a playlist of '70 s disco music left behind by Commander Lewis played by Jessica Chastain (Zero Dark Thirty, Interstellar).

Watney must rally his optimistic spirit, drawing upon his ingenuity and wit to subsist and find a way to signal to Earth that he is alive. NASA and a team of international scientists race against the clock to bring "The Martian" home, while his crewmates concurrently plot a daring, if not impossible rescue mission. Based on a best-selling novel, and helmed by master director Ridley Scott, "The Martian" features a star studded cast that includes Matt Damon, Jessica Chastain, Kristen Wiig, Kate Mara, Michael Pena, Jeff Daniels, Chiwetel Ejiofor, and Donald Glover, among others.