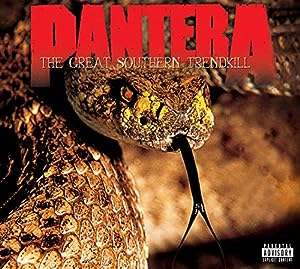 $11.76
As of 2021-06-21 04:09:56 UTC (more info)
Not Available - stock arriving soon
Buy Now from Amazon
Product prices and availability are accurate as of 2021-06-21 04:09:56 UTC and are subject to change. Any price and availability information displayed on http://www.amazon.com/ at the time of purchase will apply to the purchase of this product.
See All Product Reviews

The album turns 20 this year and to mark the occasion Rhino will release THE GREAT SOUTHERN TRENDKILL: 20th ANNIVERSARY EDITION. This two-disc set includes the original album remastered, plus a dozen previously unreleased mixes, instrumentals, and live recordings. The set also features rare photos from the era, as well as new liner notes by esteemed rock critic and radio producer Katherine Turman that explore the stories behind the album and its legacy.
The companion disc that accompanies the original album features an unreleased version of every album track, including two versions of "Suicide Note Pt. 1" - a rough mix of the track, along with a separate version of the introduction, which spotlights Dimebag on 12-string acoustic guitar. The second disc also features a newly remixed version of the title track, rough mixes for "Drag The Waters" and "The Underground In America," as well as instrumental takes for "13 Steps To Nowhere" and "Living Through Me (Hell's Wrath)." In addition to the studio recordings, the anniversary collection features three live tracks recorded at the Dynamo Festival in Holland in 1998: "War Nerve," "Suicide Note Pt. II," and "Sandblasted Skin."

Clearing the Path to Ascend