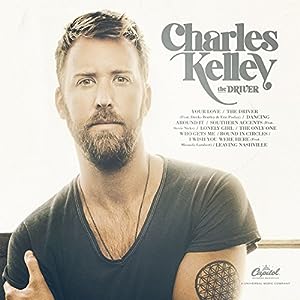 $7.01
As of 2021-07-19 13:26:19 UTC (more info)
Not Available - stock arriving soon
Buy Now from Amazon
Product prices and availability are accurate as of 2021-07-19 13:26:19 UTC and are subject to change. Any price and availability information displayed on http://www.amazon.com/ at the time of purchase will apply to the purchase of this product.
See All Product Reviews

Today, one of the most-talked-about releases of 2016 (Billboard) receives a release date as Charles Kelley announces his first-ever solo album THE DRIVER (Capitol Records Nashville) will be available Feb. 5. The nine-track disc has already received a GRAMMY nomination for its lead single/title track, which fans is available now.

Stepping outside of Lady Antebellum, one of the world s most popular groups, Kelley explores new territory with a raw sound that pushes his vocals into a lower, grittier key. Born in a ratty studio in the back of producer Paul Worley s offices, the initial batch of songs gave Kelley a sense that he was going to be diving into some new territory, with a real sense of range as Lonely Girl and Your Love have a Hall and Oates-style, while his cover of Tom Petty s Southern Accents (featuring Stevie Nicks) has a stark and melancholy feel.

"At first, it was really weird to go in the booth and be like, Where s Hillary? Where s Dave? But it was very exciting to be the leader in there and go, This is it, I m doing this, Kelley shared. "It was the most fun I ve had in the studio, because everything felt new again. It took me out of my comfort zone."

Thrilled with the first studio go-round, Kelley and Worley made plans to reconvene a few months later, where they came out with Dancing Around It, adding a shot of sexiness into the mix. The second session also included Leaving Nashville, an emotional powerhouse of a song about the ups and downs, heartaches and disappointments, of life as a songwriter. Three final songs were cut later in the year, which added to the album s moody feel and personal focus. Round in Circles, marks the first time that Charles and his brother, Josh Kelley, recorded together since Josh s early work. THE DRIVER also benefits from an appearance by Miranda Lambert on the textured I Wish You Were Here and the very last song recorded, The Only One Who Gets Me, which is the fist time Kelley has written a song specifically for and about his wife, Cassie.

While so many of these songs are something I specifically can relate to, it really is all of our story, added Kelley. "It is a pure musical left turn, to take myself out of my own head and bring in a fresh perspective when we go back in to make the next Lady Antebellum record.


In addition to his upcoming solo project and success as part of seven-time GRAMMY award-winning trio Lady Antebellum, Kelley has also penned No. one hits recorded by Luke Bryan and Darius Rucker.

The Best Of Roy Clark

only $5.03
Not Available
View Add to Cart

The Life & Songs Of Kris Kristoffers...

Songs For The Saints