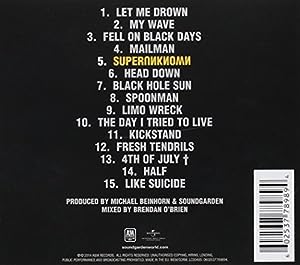 $5.85
As of 2021-06-14 18:31:56 UTC (more info)
Not Available - stock arriving soon
Buy Now from Amazon
Product prices and availability are accurate as of 2021-06-14 18:31:56 UTC and are subject to change. Any price and availability information displayed on http://www.amazon.com/ at the time of purchase will apply to the purchase of this product.
See All Product Reviews

In 2014 we celebrate the 20th anniversary of Soundgarden's massive album Superunknown which to date has sold 9 million albums worldwide and is certified five times platinum by the RIAA in the US. Both a critical and commercial success, in 1994 Superunknown debuted at #1 on the Billboard charts and earned the band two Grammys® for the singles 'Black Hole Sun' and 'Spoonman' in 1995. As relevant today as they were in 1994, the multi-platinum-selling Soundgarden continues to be in the Top 10 most played artists on Active Rock radio and the band's top 4 most played radio songs - accumulating over 1 million in total airplay and 4 billion in total audience to date - are all from this very beloved album: 'Black Hole Sun', 'Fell on Black Days', 'Spoonman' and 'The Day I Tried To Live'. In 2003, Rolling Stone ranked the album as one of the 500 Greatest Albums of All Time and the 100 Greatest Albums of the Nineties.