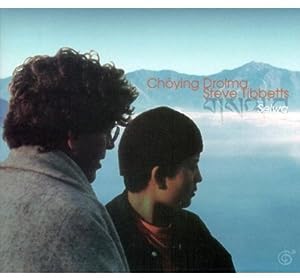 Over the past few years, the music of Tibetan monks has gained a massive audience, with Western listeners finding refuge from the rat race in the songs and chants of the East. Those same medicinal qualities are at the core of this breathtaking collaboration between veteran guitar wizard and ECM recording artist Steve Tibbetts and Choying Drolma, a Buddhist nun whom Tibbetts met and recorded at a monastery in Nepal.

The highly anticipated follow-up to their acclaimed first release, 1997’s Cho, Selwa is a beautiful sound tapestry of haunting songs that evoke a sense of peace that cuts through any language barrier. Tibbetts has one of the most recognizable guitar styles in the world and his subtle arrangements mixed with percussion from his long time collaborator Marc Anderson perfectly frame Drolma’s unforgettable voice.

It's been seven years since Minnesota-born guitarist Steve Tibbetts and Chöying Drolma, a sweet-faced, crop-haired Tibetan nun, released their first collaboration, Chö. On this sophomore effort, the two have created another series of placid sonic journeys, wherein Drolma's nasal yet pristine alto-to-mezzo soars amid a restrained blend of guitar, electronica, drones, and overdubbed voices, augmented by Marc Anderson's hand-drums and occasional hints of whispery chimes touched by nothing human. Chöying Drolma is a proponent of Vajrayana Buddhism, in which obstacles to enlightenment are proactively cut free via intense forms of meditation that can take place in graveyards and other provocative locations. No passive convent recluse, she has founded a school for nuns and continues to reach out to the world via the beauty her voice, while remaining aloof from its frenzy. The album leaves a strangely energetic peacefulness in its wake; a profound relaxation that also encourages action toward betterment. --Christina Roden