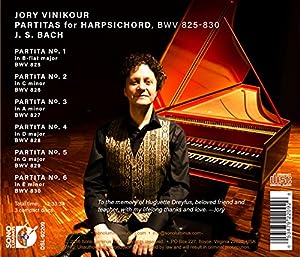 $15.80
As of 2021-06-11 22:20:21 UTC (more info)
Not Available - stock arriving soon
Buy Now from Amazon
Product prices and availability are accurate as of 2021-06-11 22:20:21 UTC and are subject to change. Any price and availability information displayed on http://www.amazon.com/ at the time of purchase will apply to the purchase of this product.
See All Product Reviews

"Vinikour's performances are so buoyant, glistening or noble that you'll likely find yourself glued to your speakers (or headphones). And if you're accustomed to hearing the harpsichord at some distance in a concert hall, be prepared to listen as if you're standing next to the keyboard..."
--Gramophone

"Playing with elegance and an innate sense of phrasing that allows lyric inventions to shine through the natural flow of the music, Mr. Vinikour achieves the distinction of offering playing that is genuinely moving."
--Joseph Newsome, Voix des Arts

The six partitas for harpsichord by Johann Sebastian Bach are among the greatest and most inspired works of all keyboard literature. Although they are the first works that Bach decided to publish, they represent the composer's genius at the height of his maturity, matched only by the Goldberg Variations. Performed on a stunning copy of a North German instrument of Bach's time, rich and expressive, but also clear and incisive, built by Tom and Barbara Wolf, each of the partitas is a microcosm, ranging from the poetic and pastoral (no. 1, in B flat Major), to the epic and tragic (no. 6, in e minor). Bach shows himself to be playful, profound, meditative, theatrical, virtuoso - and always the greatest composer of counterpoint of all time.

His debut recording for Sono Luminus, The Complete Harpsichord Works of Jean-Philippe Rameau (DSL-92154), was nominated for a GRAMMY® award, in the category of Best Classical Solo Instrumental Recording in 2013. His follow-up recording, Toccatas: Modern American Music for Harpsichord received the same honor two years later