Parade: Music from the Motion Picture "Under the Cherry Moon" 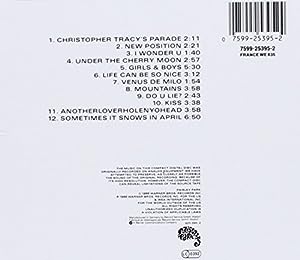 Parade: Music from the Motion Picture "Under the Cherry Moon"

$4.36
As of 2021-08-01 06:56:06 UTC (more info)
Not Available - stock arriving soon
Buy Now from Amazon
Product prices and availability are accurate as of 2021-08-01 06:56:06 UTC and are subject to change. Any price and availability information displayed on http://www.amazon.com/ at the time of purchase will apply to the purchase of this product.
See All Product Reviews

Psychedelic-tinged 1986 album, as the soundtrack to "Under The Cherry Moon". Includes "Kiss" and "Mountains".

Calling this one of Prince's most interesting albums doesn't do justice to how kicky and playable it is. The soundtrack from his failed romantic comedy Under the Cherry Moon, the disc often sounds like a preview of the supremely surefooted quirkiness of its follow-up, the classic Sign o' the Times. Marrying lean funk grooves to over-the-top orchestrations and trying his hand at Parisian balladry and a hushed, Pet Sounds-style instrumental, he triumphs as few other record makers did in 1986. --Rickey Wright

only $1.24
Not Available
View Add to Cart

only $2.92
Not Available
View Add to Cart