Misty Mountains: Songs Inspired By the Hobbit and Lord of the Rings 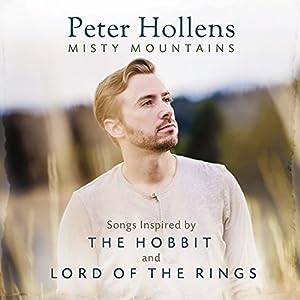 Misty Mountains: Songs Inspired By the Hobbit and Lord of the Rings

$10.99
As of 2021-06-20 02:56:08 UTC (more info)
Not Available - stock arriving soon
Buy Now from Amazon
Product prices and availability are accurate as of 2021-06-20 02:56:08 UTC and are subject to change. Any price and availability information displayed on http://www.amazon.com/ at the time of purchase will apply to the purchase of this product.
See All Product Reviews

Peter Hollens is an American pop singer and producer best known for his work on YouTube as an a cappella artist. Hollens is a one man Pentatonix he sings ALL parts of every song then layers and blends them together. With over 1.2 million YouTube subscribers, his videos have over 140 million views and his creativity is prolific, releasing a new video every two weeks. Hollens has collaborated with some of YouTube s biggest artists including Lindsey Stirling, George Watsky and Tyler Ward. Peter s new album, Misty Mountains: Songs Inspired by The Hobbit and Lord of the Rings, feature all of his music based on the Lord of the Rings movies and include guest appearances from fellow YouTube stars Taylor Davis, Tim Foust and Hank Green. The album has newly remixed versions of I See Fire and Misty Mountains plus newly recorded songs Hobbit Drinking Medley and Arwen s Song along with previously released tracks to create the complete works of all his LOTR inspired music.

Peter Hollens has released over 100 videos and has been involved with a cappella music since 1999 when he co-founded the University of Oregon s male a cappella group On The Rocks. IN 2010 he was featured on season two of NBC s The Sing Off with ON The Rocks. He also advises many companies including Patreon, OUrdr, Tubular and is on the YouTube creator advisory board. He believes in helping and educating his peers and often consults and advises many artists.

only $3.08
Not Available
View Add to Cart