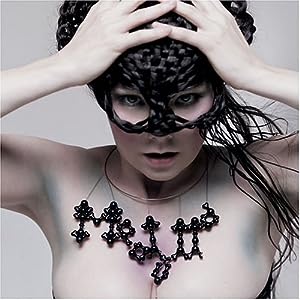 $3.15
As of 2021-06-13 00:28:17 UTC (more info)
Not Available - stock arriving soon
Buy Now from Amazon
Product prices and availability are accurate as of 2021-06-13 00:28:17 UTC and are subject to change. Any price and availability information displayed on http://www.amazon.com/ at the time of purchase will apply to the purchase of this product.
See All Product Reviews

Bjork is one of the most recognized stars in the world. She has sold millions of copies of her groundbreaking albums, she is an icon of cutting edge style, & she has received worldwide acclaim as an actress. Medulla, Bjork's first new studio album in three years, finds her delving deeper than ever before into her haunting & exhilarating sound & vision. Innovative as always, Bjork has this time built the songs on Medulla entirely from vocal tracks, with no insturments appearnig on the album, creating a soundscape unlike anything you've ever heard before. Special guests include Rahzel from The Roots, Mike Patton of Faith No More & Mr. Bungle, an Inuit throat singer, an Icelandic choir, the world's greatest human beatboxes & more.

Normally, an artist such as Bjork with a mass audience across the globe steadily eases off as the back-catalog starts to grow. However, Medulla, the fifth proper studio album from Bjork is without a doubt the most challenging collection of music she has ever released. For the most part, the album is made up of layers upon layers of processed vocal parts arranged in either harmony or dissonance such as "Vokuro" and "Oll Birtan," respectively. Some, such as "Show Me Forgiveness" are simple acapella, the aforementioned sounding like a vocal cut from Debut minus the music. Another echo of Bjork days gone by is "Desired Constellation," a slow trancy pulse underpinning her distinct vocals. "Where Is the Line," "Who Is It," and "Triumph of a Heart" are a bit grimier with a semi-urban twist, the latter a fantastically funky beatbox number with an outstanding introduction, the closest moment to a pop song appearing on Medulla. Although traditional instruments and breaks have been removed from this album, Medulla is no great departure for Bjork but in a sense it is radically different from any of her previous work. Some will love it, some hate it, and some just won't be sure what to think. --David Trueman

An Interview with Björk

Björk shared her thoughts about the directions she is taking with Medulla in our Amazon.com interview.