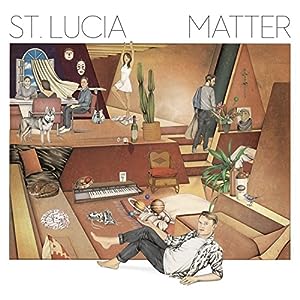 $3.72
As of 2021-08-03 01:23:22 UTC (more info)
Not Available - stock arriving soon
Buy Now from Amazon
Product prices and availability are accurate as of 2021-08-03 01:23:22 UTC and are subject to change. Any price and availability information displayed on http://www.amazon.com/ at the time of purchase will apply to the purchase of this product.
See All Product Reviews

'Matter' is the much anticipated follow-up to St. Lucia s breakthrough debut album, 'When The Night'. The new album is produced by Chris Zane (Passion Pit, The Walkmen), and is a departure for principal songwriter and bandleader Jean-Philip Grobler, who takes a more direct, essential approach. In his words, "If the last album sounded like the tropics, this album is the desert." St. Lucia's version of the desert is still an inviting place, though, one inspired by blending Grobler's fearless embrace of 80's pop, R&B, and alternative rock influences into an instantly captivating concoction.

'Matter' features lead single "Dancing On Glass," which was co-written with Tim Pagnotta (Walk The Moon). On the heart pounding "Physical," Grobler taps into primal lust, while "Help Me Run Away," co-written with Jack Antonoff (fun./Bleachers), serves as a ode to Grobler's adopted homeland of America. The album isn't without its progressive side, though, revealed in songs like "Rescue Me" and "Home", whose synth lines propels the tunes through countless electronic twists and turns. Though synth-pop has been an easy label used to categorize St. Lucia, most of the songs on Matter feature as much electric guitar, explosive percussion and complex brass arrangements as synthesizers. Nearly every track on the album contains horns and multi-part vocal arrangements, their sophistication reflective of Grobler's lifetime of music study. Grobler, a musical omnivore and connoisseur of 80's sounds, recorded much of 'Matter' on a studio consul formerly owned by Miami Sound Machine.

Reaction to St. Lucia's new music and shows has been ecstatic from fans and critics alike. SPIN called "Dancing on Glass" "euphoric" and Consequence of Sound said the smash single was "blissful." Fans have also snapped up tickets for St. Lucia's next tour. Grobler and his cohorts are first and foremost a live band, with their reputation for dazzling, immersive shows fueling their rapid growth and status as global festival favorites. The days of word-of-mouth growth and being able to introduce your friends to the music of St. Lucia for the first time appear to be numbered, as Grobler prepares to hit the biggest stages of his career with his best album to date.