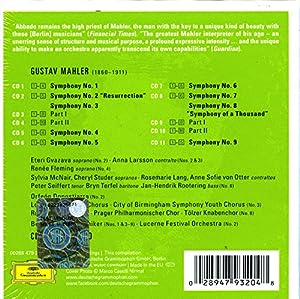 $27.66
As of 2021-07-21 06:36:45 UTC (more info)
Not Available - stock arriving soon
Buy Now from Amazon
Product prices and availability are accurate as of 2021-07-21 06:36:45 UTC and are subject to change. Any price and availability information displayed on http://www.amazon.com/ at the time of purchase will apply to the purchase of this product.
See All Product Reviews

Claudio Abbado (1933 2014) fell under the spell of Mahler s music during his years as a student in Vienna. His first memories of Mahler, conducted by Bruno Walter, Dimitri Mitropoulos and Leonard Bernstein, left a deep impression: Their interpretations were great; each of them had such a strong personality. In 1963, Abbado travelled to New York as winner of the Mitropoulos Conducting Competition to work as Bernstein s assistant at the New York Philharmonic. In 2010 he recalled a Mahler rehearsal: I remember very well during the rehearsal of Mahler s Second Symphony that Bernstein went to sit in the hall and asked me to get on the podium. He wanted to hear the very complex part, in the finale, where the principal ideas are played by the small orchestra offstage. Bernstein was surprised and very happy that I was aware of how difficult this passage was.

The inaugural concerts of Abbado s hand-picked Lucerne Festival Orchestra took place in August 2003 and included Mahler s Second Symphony, which again was recorded live. Over the next decade, Mahler was at the heart of Abbado s Lucerne programmes, and in August 2011 he conducted the Adagio from the Tenth (it would be his last Lucerne Mahler). Abbado s final Mahler concerts were all in Italy: in December 2011, the Orchestra Mozart (which he had founded in 2004) joined forces with the Orchestra of the Maggio Musicale for the Ninth Symphony in Florence. A year later, on 30 October 2012, Abbado conducted the Sixth Symphony with the Orchestra Mozart and the Filarmonica della Scala in his native city of Milan. It was his last performance of a Mahler symphony.
Nigel Simeone

Aphorisms for cello and piano - Rachmani...

only $3.17
Not Available
View Add to Cart