Live at Benaroya Hall With The Seattle Symphony 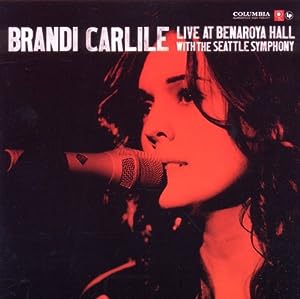 Live at Benaroya Hall With The Seattle Symphony

$7.29
As of 2021-06-07 14:17:39 UTC (more info)
Not Available - stock arriving soon
Buy Now from Amazon
Product prices and availability are accurate as of 2021-06-07 14:17:39 UTC and are subject to change. Any price and availability information displayed on http://www.amazon.com/ at the time of purchase will apply to the purchase of this product.
See All Product Reviews

Brandi Carlile - Live at Benaroya Hall with the Seattle Symphony showcases arrangements created for Brandi by Sean O'Loughlin (who's worked with Chris Isaak, Feist, Belle & Sebastian, Blue Man Group, others) and the legendary Paul Buckmaster (Elton John, David Bowie-"Space Oddity," Miles Davis-"On The Corner"). Buckmaster, who won a Grammy in 2001 for his arrangements on Train's "Drops of Jupiter," first worked with Brandi in 2009 on Give Up The Ghost, her third studio album.

Brandi Carlile, winner of Seattle's City of Music Breakthrough Award for 2010, sold-out her Benaroya debut in 2008. Returning to the Hall for the first time last November, after touring more than a year in support of Give Up The Ghost, Carlile treated her fans to an expanded road-polished repertoire, performing an exquisite set-list of original compositions and covers including Leonard Cohen's "Hallelujah," Simon & Garfunkel's "The Sound of Silence" and Elton John's "Sixty Years On.

I Used To Be Pretty

To Be Everywhere Is To Be Nowhere