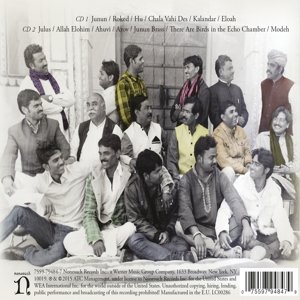 $9.05
As of 2021-06-16 08:05:10 UTC (more info)
Not Available - stock arriving soon
Buy Now from Amazon
Product prices and availability are accurate as of 2021-06-16 08:05:10 UTC and are subject to change. Any price and availability information displayed on http://www.amazon.com/ at the time of purchase will apply to the purchase of this product.
See All Product Reviews

Nonesuch Records releases Junun—an album from composer/musician Shye Ben Tzur, guitarist Jonny Greenwood, and the Rajasthan Express, a group of Indian qawwali musicians—on November 13, 2015. Recorded earlier this year in a makeshift studio inside the 15th-century Mehrangarh Fort in Jodhpur, India, the album was made with Radiohead's producer Nigel Godrich, who worked with the ensemble to create this two LP/CD album. The album features Ben Tzur's compositions, which combine ecstatic, devotional Sufi qawwal musical traditions and his native Hebrew.

The filmmaker Paul Thomas Anderson, a friend and frequent collaborator of Greenwood, came along to document the recording sessions as well as daily life and the close camaraderie of artistic collaboration. Anderson's resulting impressionistic film, also entitled Junun, debuted at the New York Film Festival on October 8 and begins streaming exclusively on MUBI, where it will stream for 30 days, on October 9. Junun also will be shown at the Rome Film Festival in mid-October.

Greenwood made a guest appearance last year during Ben Tzur's London concert, where they previewed some of the music of Junun, and this summer, the two were joined by the qawwali party for two performances at the Jerusalem Sacred Music Festival. Further concerts are being planned for the future, as are additional screenings of Anderson's film.

only $5.22
Not Available
View Add to Cart

Echoes Of Home: The Most Glorious Celtic...