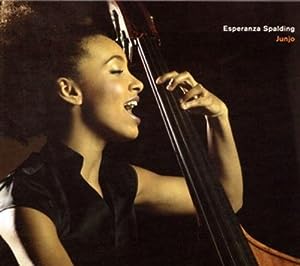 $11.25
As of 2021-07-24 16:53:32 UTC (more info)
Not Available - stock arriving soon
Buy Now from Amazon
Product prices and availability are accurate as of 2021-07-24 16:53:32 UTC and are subject to change. Any price and availability information displayed on http://www.amazon.com/ at the time of purchase will apply to the purchase of this product.
See All Product Reviews

Esperanza Spalding won the Grammy Award for Best New Artist at the 2011 Grammy Awards, making her the first jazz talent to nab that title. Junjo is the artist s debut recording from 2006, showcasing her silky jazz sound as well as her interplay with bandmates Aruan Ortiz on piano and Francisco Mela on drums. The music is smooth as silk, featuring lush ensemble performances in a mix of original songs and covers by high-profile jazz greats like Chick Corea and Jimmy Rowles.

The debut recording by now FOUR TIME Grammy Award Winner! Vocalist and bassist Esperanza Spalding is a native of Portland, OR, whose music is an exercise in joy and freedom. Well rendered for such a very young musician, it's quite notable, considering the certainty of her concept and clarity of her vision. While steeped in contemporary jazz, there are Latin flavors, unabashed free moments, and some implied and direct swing. Further, it is an expression of her well-being, optimism, and future hope for her life in this music. Also in her peer group, pianist Aruan Ortiz and drummer Francisco Mela add a hundredfold to this music and establish themselves as leaders-to-be, and are quite capable partners for Spalding's wonderful sounds.

The first piece, a take of the Jimmy Rowles evergreen The Peacocks, lets you know something special is going on. Spalding's bass leads out with the probing piano of Ortiz as wordless vocals and a modal jam all precede the melody, followed by a free section. The imagination quotient of this interpretation is off the charts. Mompouana is a most impressive circular tune surrounding the sweetness and light of Spalding's voice in a 9/8 time signature, choppy piano motifs, upper to midrange drama, and thoughtful, intricate secondary lines. In their ultimate playful state, Perazun and Perazela show Spalding's ability to scat, with Ortiz on the former and furiously alongside Mela on the latter track. The other covers are a darker-than-the-original rendition of Chick Corea's neo-bopper Humpty Dumpty and the personable, lighthearted Loro, written by Egberto Gismonti. Two Bad, with a feeling reminiscent of the standard Alone Together, is a brittle, quirky, and unpredictable tune that is the only instrumental of the lot. Spalding sings no lyric content whatsoever; her style is all natural, sensual, and precious. Whether she is coerced to sing songs in the future is to be determined. Junjo is an auspicious beginning that should catch the ears of any lover of great music.

Junjo boasts an unusual format: A young American woman playing bass and singing wordless vocals with the accompaniment of a Cuban pianist and drummer. But 22-year-old Esperanza Spalding, an Oregon native who teaches at Boston's Berklee College of Music, is so confident in her multiple roles (she also produced the album, released on a Spanish label) and the music goes down so easily, all awareness of her band's makeup quickly fades. With their lighter-than-air quality, the tunes sometimes recall early Return to Forever (an association underlined by the inclusion of a Chick Corea composition) and her playing boasts the warm, richly amplified quality favored by many young bassists. But with pianist Aruan Ortiz stretching and shaping the melodies, Junjo is winningly personal. In addition to several originals by Spalding, alone or in collaboration with Ortiz or her drummer, Francisco Mela, it includes a smart and playful reworking of Jimmy Rowles' classic, "The Peacocks." --Lloyd Sachs