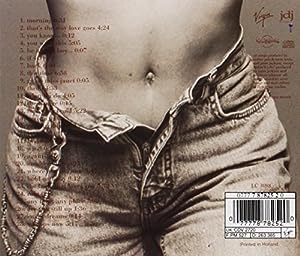 $3.99
As of 2021-07-26 05:09:44 UTC (more info)
Not Available - stock arriving soon
Buy Now from Amazon
Product prices and availability are accurate as of 2021-07-26 05:09:44 UTC and are subject to change. Any price and availability information displayed on http://www.amazon.com/ at the time of purchase will apply to the purchase of this product.
See All Product Reviews

Why is Janet Jackson's Janet the best Michael Jackson album since Thriller and the best Madonna album since..., well, since ever? Perhaps it's because Michael's kid sister is the only one of these three aerobic video stars with enough smarts to realize that sex, hooks, and beats are all that matter in this field of lightweight dance pop. Or perhaps it's because the sexuality Janet radiates through her sweet melodies and hip-tugging grooves is so much more credible than Michael's arrested prepubescence or Madonna's nothing-personal-just-business comeons. After her embarrassing posture as a sociocultural analyst on 1989's Rhythm Nation 1814, Janet has returned to her strength--using her odd mix of girlishness and maturity to make dance numbers about personal relationships ring exceptionally true. Even so, the 75-minute, 27-track Janet doesn't really work as an album; there's too much filler and the between-song transitions quickly grow tiresome. The album is full of killer singles, though, starting with such proven cuts as the extremely slinky "That's the Way Love Goes" and rock-guitar-driven "If," and featuring such future hits as the Prince-like "This Time," the Motown-like "Because of Love," the breathy ballad "Where Are You Now" and the inspired Stax cover, "What'll I Do. --Geoffrey Himes