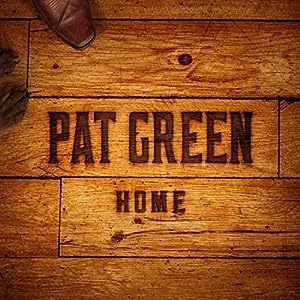 $11.13
As of 2021-06-12 22:39:39 UTC (more info)
Not Available - stock arriving soon
Buy Now from Amazon
Product prices and availability are accurate as of 2021-06-12 22:39:39 UTC and are subject to change. Any price and availability information displayed on http://www.amazon.com/ at the time of purchase will apply to the purchase of this product.
See All Product Reviews

A three-time Grammy nominee, Pat Green has become a critics' darling and a touring powerhouse; selling out venues from Terminal 5 in NYC and Joe's in Chicago, to House
of Blues Los Angeles and the Houston Astrodome in Texas. Green's explosive live shows have made him a hot ticket landing tours with Kenny Chesney, Dave Matthews Band,
Willie Nelson and Keith Urban. Deemed
"The Springsteen of the South West" by People Magazine, Green's lyrics and guy-next-door charm have also earned comparisons to John Mellencamp. He has sold over 2 million albums, released a collection of hits on country radio and has been praised in Esquire, Rolling Stone, People, USA Today, New York Times, Los Angeles Times, Associated Press, American Songwriter, Country Weekly, Playboy and Billboard. Green's last single "Girls From Texas" (a duet with Lyle Lovett), spent a massive 7 weeks at #1 on the Texas Music Chart. His new single "While I Was Away" from his forthcoming album HOME is available now on iTunes. The video for "While I Was Away" made its debut at People.com and instantly struck a chord with listeners, appealing to workingmen and women who miss cherished moments at home with their families while they are away at work. Green's ability to turn a phrase that appeals to the working class remains his ace in the hole, resonating with men and women old and young, and music fans from coast to coast. Green's album HOME is scheduled for release on August 14th.

The Greatest: The Number Ones

The Music Of Nashville, Season 2, Vol. 1

only $3.50
Not Available
View Add to Cart

only $4.22
Not Available
View Add to Cart