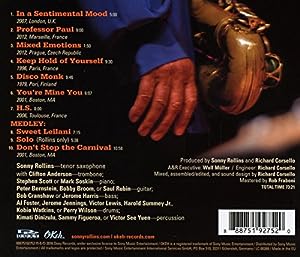 $6.75
As of 2021-06-24 21:42:15 UTC (more info)
Not Available - stock arriving soon
Buy Now from Amazon
Product prices and availability are accurate as of 2021-06-24 21:42:15 UTC and are subject to change. Any price and availability information displayed on http://www.amazon.com/ at the time of purchase will apply to the purchase of this product.
See All Product Reviews

Holding the Stage (Road Shows, Vol. 4) is pure Sonny Rollins it is the essence of Sonny Rollins as a musician. The music is some of his most expressive live recordings, from 1979 at the Pori Jazz festival in Finland to 2012 in Marseille and Prague. The album features a stunning five minute solo performance, a groovy version of Don t Stop the Carnival and a beautiful In a Sentimental Mood . The ten tracks on the album simply confirm: Sonny Rollins is one of a kind, a master improviser and unique musician.

Over the span of his storied and still-unfolding 65-year career, Sonny Rollins has established himself as one of the giants of jazz a towering influence, a trailblazer, a powerfully creative force in music. From his earliest masterpieces, such as Saxophone Colossus and Freedom Suite, to the Road Shows archival series, Rollins has presented his peerless music without compromise and to consistent international acclaim. Grammy®-winner Rollins received a Lifetime Achievement Award from the National Academy of Recording Arts and Sciences in 2004. Rollins was presented with the National Medal of Arts at a White House ceremony in 2011 and later that year received the Kennedy Center Honors.

Tom Dowd & the Language of Music