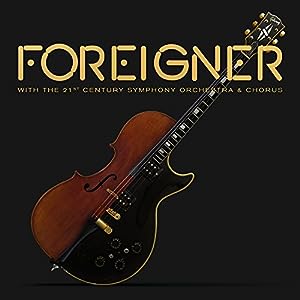 $6.98
As of 2021-06-05 13:08:43 UTC (more info)
Not Available - stock arriving soon
Buy Now from Amazon
Product prices and availability are accurate as of 2021-06-05 13:08:43 UTC and are subject to change. Any price and availability information displayed on http://www.amazon.com/ at the time of purchase will apply to the purchase of this product.
See All Product Reviews

Foreigner is universally hailed as one of the most popular rock bands in the world, racking up scores of smash hits, multi-platinum albums and sold out concert tours. From 'Cold As Ice' to 'Hot Blooded', 'Urgent' to 'Juke Box Hero' and 'Waiting for a Girl Like You'. Foreigner's thrilling mix of blustery blues and impeccably crafted pop continues to captivate generation after generation of music fans.

Today, over 80 million albums later, Foreigner is an ensemble of talented musicians each adding their individual credentials to make the band stronger and more powerful than ever. Besides founding member and leader Mick Jones on lead guitar and vocals, the band s line up consists of Kelly Hansen (Ex-Hurricane) as lead singer, Tom Gimbel ( Aerosmith) on guitar, saxophone, flute, and backing vocals; Jeff Jacobs on keyboards, Jeff Pilson (Ex-Dokken, Dio and MSG) on bass; and Jason Bonham (son of Led Zeppelin's drummer John Bonham) on drums.

This magnificent concert was recorded at KKL Luzern, Switzerland on May 20th and 21st 2017 and thus became the very first Foreigner album, recorded with orchestra and choir. Together with The 21st Century Symphony Orchestra & Chorus, the performance showcases some of rock n' roll's most enduring anthems and countless fan favorites. Featuring original new arrangements and instrumentations, Foreigner's signature songs can be enjoyed from a completely new perspective
and with fantastic sound quality.

Where It All Begins