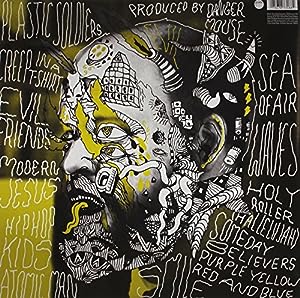 $19.80
As of 2021-06-01 17:12:25 UTC (more info)
Not Available - stock arriving soon
Buy Now from Amazon
Product prices and availability are accurate as of 2021-06-01 17:12:25 UTC and are subject to change. Any price and availability information displayed on http://www.amazon.com/ at the time of purchase will apply to the purchase of this product.
See All Product Reviews

Note:the cd is located inside the opening sleeve of the vinyl When it came time to begin work on the seventh album, Gourley thought long and hard about the next move and kept coming back to one concept: The most satisfying work is collaborative work. From building houses with his father in Alaska to building a devoted fanbase, he had sought partnerships. So he took a bold step - bold for a proven band, bolder still for its uncertainty of sound - a step up to the apartment of a possible collaborator, Danger Mouse.

So Danger Mouse - aka Brian Burton, the five-time Grammy award winning producer behind everything from Gnarls Barkley and Beck to The Black Keys and now U2 -and the band agreed that they were game for the challenge and began production on what would become Evil Friends, the undaunted re-awakening for Portugal. The Man. As much as their collaborative imaginations melded, to construct songs that lived up to the ambitious visions they had would take some time. After all, here was a band with an evolving lineup - Kyle O'Quin on keyboards, Noah Gersh on guitar/percussion/keyboards, and Kane Ritchotte on drums joined Zach Carothers on bass and vocals and Gourley on lead vocals and guitar - building songs with a new producer trying to do something neither of them had done before.

Each track on Evil Friends is as different from the next as Portugal. The Man's previous records were from each other, which is to say a piece of a growing mindscape, and wholly a part of the group's tumbling fever dream.

only $4.31
Not Available
View Add to Cart

only $9.52
Not Available
View Add to Cart

This Is Not A Test

only $3.83
Not Available
View Add to Cart