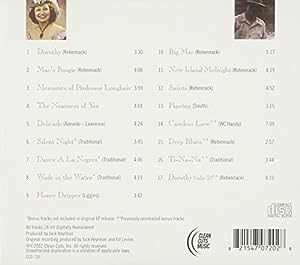 $14.07
As of 2021-06-21 16:00:18 UTC (more info)
Not Available - stock arriving soon
Buy Now from Amazon
Product prices and availability are accurate as of 2021-06-21 16:00:18 UTC and are subject to change. Any price and availability information displayed on http://www.amazon.com/ at the time of purchase will apply to the purchase of this product.
See All Product Reviews

By the early '80s, Dr. John was mostly in demand as a session player and ad jingle writer, but he cut a pair of back-to-back solo piano albums that proved he was still capable of greatness. The first, Dr. John Plays Mac Rebennack, ranges widely, from joyous tributes ("Memories of Professor Longhair," "Pinetop") and slow blues ("New Island Blues," "Saints") to graceful standards such as "Dance à la Negres" and "Wade in the Water." With the exception of a gentle version of "The Nearness of You" and a peppy take on "Silent Night," this album is all instrumental--a joy if you're a fan of solo piano, though perhaps a bit wearing if you're not. (The 2002 reissue adds four previously unreleased bonus tracks.) --Keith Moerer

The Cream of Clapton