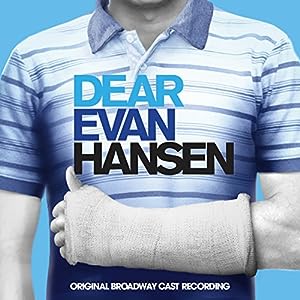 $19.11
As of 2021-06-11 12:52:43 UTC (more info)
Not Available - stock arriving soon
Buy Now from Amazon
Product prices and availability are accurate as of 2021-06-11 12:52:43 UTC and are subject to change. Any price and availability information displayed on http://www.amazon.com/ at the time of purchase will apply to the purchase of this product.
See All Product Reviews

About a high schooler with social anxiety disorder who takes a troubling route to find human connection, Dear Evan Hansen is a 2015 stage musical with music and lyrics by Benj Pasek and Justin Paul, lyricists for Academy Award darling La La Land. Its book was written by Steven Levenson, a writer/producer for TV's Masters of Sex. The show premiered in Washington, D.C. in the summer of 2015 and, after some off-Broadway stops, opened at Broadway's Music Box Theatre in December 2016. The Broadway cast album was recorded that same month and stars Ben Platt, who originated the title role. Platt had appeared in the music-themed films Pitch Perfect, Pitch Perfect 2, and Ricki and the Flash prior to taking the part, and is also an alumnus of Broadway's The Book of Mormon. His nimble performance does the heavy lifting for the show, with Evan taking part in all but three of the 14 songs (not counting a reprise of "Sincerely, Me" that doesn't appear on the cast recording). A heartfelt song set with lighter and more theatrical moments, the show's cast is accompanied by an eight-piece orchestra led by piano and acoustic guitar.

1.Anybody Have a Map?
2.Waving Through a Window
3.For Forever
4.Sincerely, Me
5.Requiem
6.If I Could Tell Her
7.Disappear