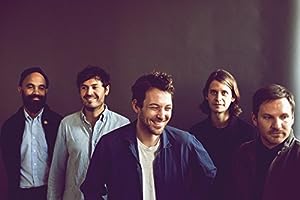 $8.43
As of 2021-06-19 20:33:03 UTC (more info)
Not Available - stock arriving soon
Buy Now from Amazon
Product prices and availability are accurate as of 2021-06-19 20:33:03 UTC and are subject to change. Any price and availability information displayed on http://www.amazon.com/ at the time of purchase will apply to the purchase of this product.
See All Product Reviews

Fleet Foxes will release Crack-Up, its long-awaited and highly anticipated third album, June 16 on Nonesuch Records. Crack-Up comes six years after the 2011 release of Helplessness Blues and nearly a decade since the band's 2008 self-titled debut. All eleven of the songs on Crack-Up were written by Robin Pecknold. The album was co-produced by Pecknold and Skyler Skjelset, his longtime bandmate, collaborator, and childhood friend. Crack-Up was recorded at various locations across the United States between July 2016 and January 2017: at Electric Lady Studios, Sear Sound, The Void, Rare Book Room, Avast, and The Unknown. Phil Ek mixed the album, at Sear Sound, and it was mastered by Greg Calbi at Sterling Sound. Fleet Foxes is Robin Pecknold (vocals, multi-instrumentalist), Skyler Skjelset (multi-instrumentalist, vocals), Casey Wescott (multi-instrumentalist, vocals), Christian Wargo (multi-instrumentalist, vocals), and Morgan Henderson (multi-instrumentalist).
"A rich, ideas-driven record which pulls off a pretty unlikely feat: infusing Fleet Foxes' music with the same sense of transcendence and beauty that they managed the first time, now delivered with an added sense of expansive musical ambition. Confirms that rarest of achievements: a group somehow hanging on to the essence of who they are, while pushing their art into thrillingly unforseen places." Q Magazine

"At a time when indie-rock seems to be growing more culturally marginal by the day, Crack-Up is a defiant artistic statement, an album that dares to feel important." The New York Times
"Likely to be the most remarkable album you will hear this year...the return of one of the most original bands of this century." The Times

"Astonishing. Crack-Up may be the most anticipated release of the year; a welcome return. Ambitious, mature, meticulous." Uncut

only $6.33
Not Available
View Add to Cart

Tearing At The Seams

only $3.02
Not Available
View Add to Cart