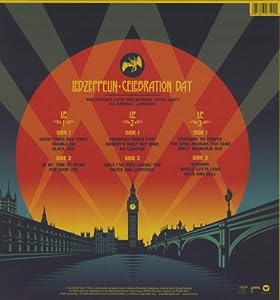 $36.53
As of 2021-07-30 04:29:56 UTC (more info)
Not Available - stock arriving soon
Buy Now from Amazon
Product prices and availability are accurate as of 2021-07-30 04:29:56 UTC and are subject to change. Any price and availability information displayed on http://www.amazon.com/ at the time of purchase will apply to the purchase of this product.
See All Product Reviews

On December 10, 2007, Led Zeppelin took the stage at London’s O2 Arena to headline a tribute concert for dear friend and Atlantic Records founder Ahmet Ertegun. What followed was a two-hour-plus tour de force of the band’s signature blues-infused rock ’n’ roll that instantly became part of the legend of Led Zeppelin. Founding members Robert Plant, Jimmy Page and John Paul Jones were joined by Jason Bonham, the son of their late drummer John Bonham, to perform 17 songs from their celebrated catalog including landmark tracks "Whole Lotta Love," "Rock And Roll," "Kashmir," and "Stairway To Heaven." A film of the show, "Celebration Day, is now available on DVD and Blu-ray and includes the entire concert in HD video and in 5.1, 48/24 hi-resolution audio surround sound. "Celebration Day" is an incredible document of the now legendary concert, which has been described as possibly the greatest rock and roll concert ever. The two hour feature length film is presented in beautiful high definition video, and stunning audio quality. The aspect ratio is 16x9. The film is directed by Dick Carruthers who had previously worked with Led Zeppelin on their award winning 2003 release "DVD" - a release that remains one of the highest selling music DVD's of all time. The "Celebration Day" film is already critically acclaimed and the DVD & Blu-ray releases are certain to become consistently high selling titles in the Led Zeppelin catalog. A bonus DVD in the deluxe versions features the dress rehearsal at Shepperton Studios, filmed a few days before the O2 concert. The rehearsal is filmed in SD and recorded in stereo.

* Bonus DVD contains the full rehearsal from Shepperton Studios from 12/6/07, BBC News footage from the evening of the show and the complete Tampa News piece from 1973 that opens the film

only $6.57
Not Available
View Add to Cart