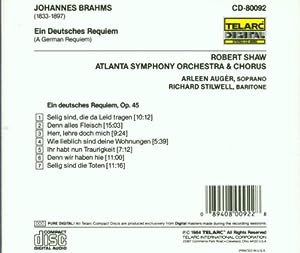 $5.99
As of 2021-07-16 04:47:21 UTC (more info)
Not Available - stock arriving soon
Buy Now from Amazon
Product prices and availability are accurate as of 2021-07-16 04:47:21 UTC and are subject to change. Any price and availability information displayed on http://www.amazon.com/ at the time of purchase will apply to the purchase of this product.
See All Product Reviews

Robert Shaw, despite being a fine choral conductor, was often a pretty boring interpreter--like most choral conductors, in fact. However, there were times that he really put everything together, particularly in his many fine recordings for Telarc, and this is one of the best. Of course, it helps that the music itself is largely pretty subdued, but Shaw directs a performance of exemplary clarity and genuine nobility of utterance. Gorgeous recorded sound too. --David Hurwitz