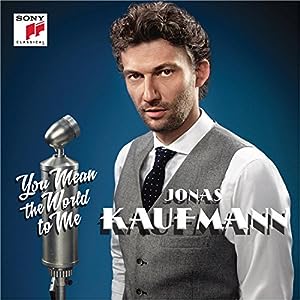 $11.98
As of 2022-11-19 17:45:28 UTC (more info)
Not Available - stock arriving soon
Buy Now from Amazon
Product prices and availability are accurate as of 2022-11-19 17:45:28 UTC and are subject to change. Any price and availability information displayed on http://www.amazon.com/ at the time of purchase will apply to the purchase of this product.
See All Product Reviews

"You Mean the World to Me"

Jonas Kaufmann's new album, "You Mean the World to Me," features songs from the golden era of German music that flourished in Berlin between 1925 and 1935. Drawing inspiration from an artistically rich and fascinating time of European musical history, the repertoire ranges from the Lehár-Tauber hits of the "Roaring Twenties" to the heyday of the "Talkies" films in the mid 1930s which saw the eventual expulsion and banning of the composers, lyricists and singers who had defined the genre. The songs on "You Mean the World to Me" are drawn from three genres; talking movies, operettas and pop songs of the day with Kaufmann showing his undeniable mastery of this demanding repertoire written for the leading tenors of the day.

About Jonas Kaufmann
Munich-born singer, Jonas Kaufmann, is without a doubt at the absolute top echelon of the operatic world. He is in extreme demand with the world s most influential conductors, selling out opera houses and concert venues months in advance wherever he performs. In 2011, he received the Opera News Award in New York and was made a Chevalier de l Ordre des Arts et des Lettres in France. He has been awarded Singer of the Year by many prestigious journals including ECHO Klassic and Musical America. Kaufmann is also an internationally sought-after concert and lieder singer. In October of 2011 he performed the first solo recital to be given at the Metropolitan Opera since Luciano Pavarotti in 1994.