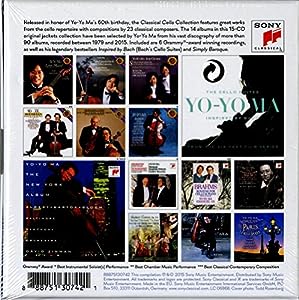 $24.17
As of 2022-06-16 04:20:11 UTC (more info)
Not Available - stock arriving soon
Buy Now from Amazon
Product prices and availability are accurate as of 2022-06-16 04:20:11 UTC and are subject to change. Any price and availability information displayed on http://www.amazon.com/ at the time of purchase will apply to the purchase of this product.
See All Product Reviews

Released in honor of Yo-Yo Ma's 60th birthday on October 7, the set features great works from the classical cello repertoire with compositions by 23 classical composers. The 14 classic albums in this 15-CD originals jackets collection have been selected by Yo-Yo Ma from his vast discography of more than 80 original albums, recorded between 1979 and 2015. Included are 5 Grammy award winning recordings as well as his legendary bestsellers Bach Cello Suites Inspired by Bach and Simply Baroque.

Highlights of the collection:
- The great cello concertos by Boccherini, Dvorák, Elgar, Walton, Saint-Saens and more
- Collaborations with long time partners such as Emanuel Ax, Isaac Stern and Kathryn Stott
- An appreciation written by Nicholas Cords from the Silk Road Ensemble and Brooklyn Rider

only $2.24
Not Available
View Add to Cart