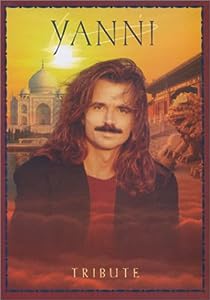 $21.98
As of 2021-04-22 15:06:24 UTC (more info)
Not Available - stock arriving soon
Buy Now from Amazon
Product prices and availability are accurate as of 2021-04-22 15:06:24 UTC and are subject to change. Any price and availability information displayed on http://www.amazon.com/ at the time of purchase will apply to the purchase of this product.
See All Product Reviews

This tribute DVD chronicles Yanni's two very special concert events at the Taj Mahal and The Forbidden City, featuring the songs from 1997's platinum "Tribute" CD. This DVD also includes "No Borders, No Boundaries," a documentary on the production of eas

Exotic locales and famous monuments! Adagios and waltzes! Spectacle and bombast! A didgeridoo and an orchestra too! Yanni's amazing hair!! All this and much more make Tribute a feast sure to be eagerly devoured by the Greek composer-keyboardist's legions of fans--and it's not hard to understand why, as it is an impressive achievement. The DVD chronicles Yanni's 1997 concerts at India's Taj Mahal (the first concert staged there) and Beijing's Forbidden City (the first-ever performance there by a Western artist), and these splendid settings are certainly shown to good effect throughout this well-directed, great-sounding program. As for the music, well, that's all a matter of taste; what might be schlocky to one person will be beautiful and majestic to another. But regardless of one's musical leanings, no one can dispute that the 90-minute concert, combining numbers from both locations, provides a healthy and representative dose of Yanni's New Age-cum-classical-cum-world music sounds, and they are well played by the international cast of nearly 50 musicians and singers (violinist Karen Briggs and guitarist Pedro Eustache acquit themselves especially well among the soloists).

And that's not all, as the DVD is loaded with bonus features. Principal among them is "No Borders, No Boundaries," a beautifully photographed, hourlong film narrated by actor Christopher Plummer; part documentary and part travelogue, it contains musician profiles, Yanni biographical material, some Indian and Chinese history, and information about how the concerts came about. Other features include a lengthy Yanni interview and discography, as well as audio options. In the end, Yanni detractors are unlikely to be converted, but then, they can always put on their Limp Bizkit CDs instead. --Sam Graham

only $9.36
Not Available
View Add to Cart