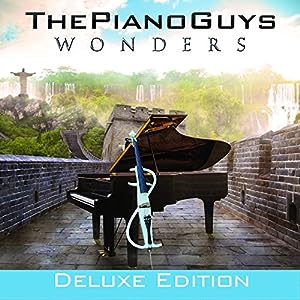 $8.89
As of 2022-09-22 18:49:19 UTC (more info)
Not Available - stock arriving soon
Buy Now from Amazon
Product prices and availability are accurate as of 2022-09-22 18:49:19 UTC and are subject to change. Any price and availability information displayed on http://www.amazon.com/ at the time of purchase will apply to the purchase of this product.
See All Product Reviews

115 Weeks at #1 on multiple Billboard Charts

The Piano Guys, the remarkable classical/pop crossover music stylists, release their new album, Wonders, featuring popular hits like you've never heard them before. Their first three albums, "The Piano Guys," "The Piano Guys" and "A Family Christmas" have sold over 575,000 physical and digital albums in the U.S. Their albums have been #1 on multiple Billboard Charts for over 115 weeks while garnering rave reviews and leading to performances on major television programs including "The Today Show," "Tonight Show with Jay Leno," "Katie," "CBS This Morning," "Huckabee" and "Fox and Friends." They are a YouTube phenomenon from their self-made innovative videos in stunning locations that have amassed three million YouTube subscribers and more than 500 million views.

TPG's new album, "Wonders," features successful single releases from the past year such as "Let It Go" from the movie "Frozen," "Kung Fu Piano: Cello Ascends," "Don't You Worry Child," and "Story of my Life" available for the first time on CD. The album also includes new songs in their signature style from such artists as Dave Matthews, Phillip Phillips and One Direction, a fun take on various Batman themes throughout the years, "Batman Evolution," plus original compositions from the band. "Wonders" is available as a Deluxe CD + DVD set that includes a bonus DVD of six of their hit music videos. The Piano Guys have become a touring phenomenon selling out shows across the country and will be touring throughout the U.S. extensively.