With Love From Our Friends 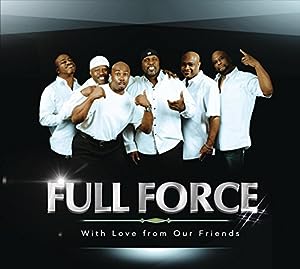 With Love From Our Friends

$13.00
As of 2023-01-29 05:39:10 UTC (more info)
Not Available - stock arriving soon
Buy Now from Amazon
Product prices and availability are accurate as of 2023-01-29 05:39:10 UTC and are subject to change. Any price and availability information displayed on http://www.amazon.com/ at the time of purchase will apply to the purchase of this product.
See All Product Reviews

FULL FORCE is one of music's legendary award-winning R&B/hip hop vocal band/production teams, with a proven track record, that stands among the most talented and successful musician collectives in modern pop, r&b, hip-hop and dance. Writers, producers, and performers all, the pioneering group is behind a seemingly endless string of genre-busting, groundbreaking classics, spanning UTFO's seminal "Roxanne Roxanne" and the blockbuster Lisa Lisa & Cult Jam with Full Force, collaborations with icons like James Brown, Selena, and Bob Dylan, and writing and/or producing major tracks by such superstars as Rihanna, Backstreet Boys, Justin Timberlake & Nsync, Jill Scott, The Black Eyed Peas, and countless others.

With Love From Our Friends not only unifies a variety of artists but also reflects the group's broad range of sounds and styles. The first early album appetizer from the album is the electrifying ballad, "All Cried Out (Feat. Tisha Campbell-Martin)," which premiered earlier this year at Urban AC radio outlets nationwide. The album also includes a sizzling female empowerment song entitled, "Thank You For Leaving Me (Feat. Meli'sa Morgan and Cheryl Pepsii Riley)," which features a sassy spoken intro by Vivica A Fox. The track entitled "I Feel Good, I Look Good, I m God Good (Feat. Faith Evans, Sheila E and The God Good Choir & Children)," is the soaring anthem that has already impacted Gospel and Inspirational radio across the country.