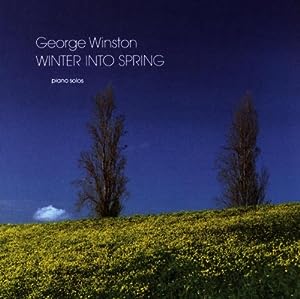 $6.14
As of 2020-09-16 04:17:28 UTC (more info)
Not Available - stock arriving soon
Buy Now from Amazon
Product prices and availability are accurate as of 2020-09-16 04:17:28 UTC and are subject to change. Any price and availability information displayed on http://www.amazon.com/ at the time of purchase will apply to the purchase of this product.
See All Product Reviews

More like poems for piano than traditional, structured songs, the music of George Winston plays like a lyrical soundtrack to the natural world's rhythms, and nowhere is this more brilliantly enacted than on his third album, Winter into Spring. There are wondrous, beautiful melodies here, but what's amazing is Winston's intense inspiration that spills from his spirit and flows straight to the keys. He uses simple techniques that would hardly impress the most intellectual of music critics but can bring any listener with an artist's heart to tears. Tense and full of motion, his Steinway urgently rolls through songs like aspen leaves fluttering in the wind. From the first sparse, tinkling notes of "January Stars," Winston pulls you into his solitary dreamscape and doesn't let you go until the CD's end. During "January Stars" it's hard not to imagine standing in crunchy snow while staring up at stars glittering in a black, expansive sky. Another standout, the 10-minute "Rain," may be the most archetypal of Winston pieces. Beginning with serene, deliberate melodies, the piece jumps into a chiming complexity that grows until the listener is drenched in streams of urgent, rushing-watery notes. It's fitting Winston named this album after a transition because the music couldn't take you to lovelier places. A masterpiece. --Karen Karleski